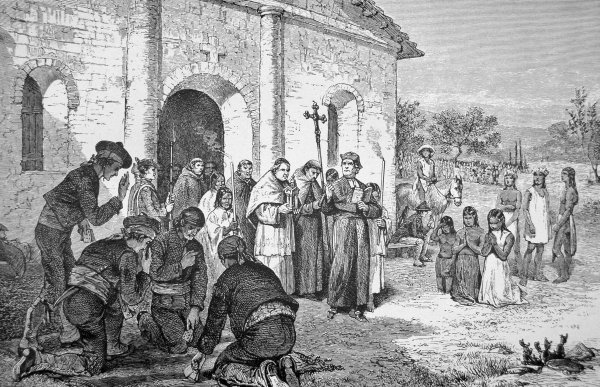 California Missions is your ultimate on line resource for information about the twenty-one beautiful Spanish missions that line the state of California. From San Diego to Sonoma, each of the historical missions has a colorful two-hundred-year-old story to tell. Our goal is to educate and inform Internet visitors about the fascinating history that is contained inside their massive adobe walls.

In 1769, Franciscan Father Junípero Serra founded the first California Spanish Mission in San Diego. Over the next 54 years, twenty more missions were opened along the California coast. These Spanish missions, designed to spread Christianity among the Native Americans, joined the existing Spanish, French, and British missions in Arizona, Florida, Georgia, Texas and New Mexico. The missions prospered until 1833, when the Mexican government began selling the rich mission land to private citizens in a process called secularization.

Although not trained as architects, the mission founders successfully combined the available raw materials, the building skill of the native Indians, and their Spanish heritage to create the twenty-one missions on the California coast. Their massive, low silhouettes demonstrate the limitations of adobe as a building material. This earthen brick, though strong, tended to be very heavy. The blocks could not be stacked too high, since they tended to topple. To prevent this and hold the weight of the tile roof, the walls had to be constructed up to five feet thick. Further, the use of adobe dictated that the missions had to be built with large awnings as the adobe walls dissolved in the rain. The areas exposed to the elements were plastered with lime stucco.

Today, the missions stand as the single greatest influence in California architecture. Their influence runs from the university campus, to office buildings and millions of residential houses that share the “Spanish style” of stucco walls and tile roofs. When grouped together, the missions represent a combination of necessary, simple, yet massive construction influenced by their Spanish heritage from a continent thousands of miles away.

The state of California draws over 100 million tourists each year from around the world. For millions of those travelers, a visit to one or more of the twenty-one California Spanish Missions is an integral part of their trip. With this in mind, it is no wonder that the missions draw more travelers to their pleasant grounds than any other historical attraction in the state. Some are lost in a metropolitan embrace, while others still stands in open valleys and remind visitors of the pastoral charm that was once their setting. The missions, and their history, recall the extent of Spanish influence in California.